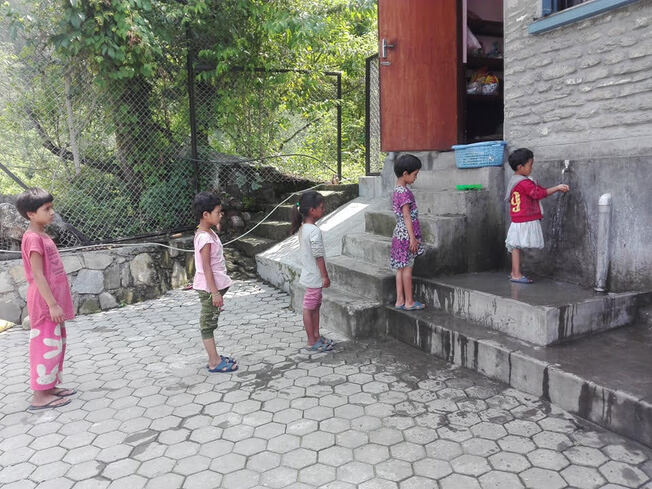 The children have been excited to watch the construction of the Polytunnel which now just needs the polythene covering. Already they have been helping Nirmala plant vegetables. Now is the time for planting in Nepal to provide food for the cold winter months ahead.
9th May '20
Recent severe hailstorms damaged crops being grown at Sarangkot Nestling Home to help feed the children. Now thanks to the resourcefulness of Krishna and his friends from Alliance Nepal, a bamboo polytunnel is being constructed to help protect future crops from storms and monsoon rains. The Nestling Trust thanks Krishna and Alliance Nepal most sincerely for their hard work, especially at a time of such difficulty and concern due to the Covid-19 outbreak in Nepal.

'Homeschooling' for the children as Nepal is 'Locked down' until 18th May '20 to help reduce the spread of the Coronavirus!

Today is the last day of the Dashain Festival, the biggest Festival in the Nepali calendar. It is a time when traditionally families travel home to celebrate together. Feasting and visiting friends and relatives is the order of the day! They receive and exchange the sign of the Tikka when blessings are bestowed. Kites are flown to hopefully bring an end to the heavy rain and in the villages bamboo swings are erected on which the children to play.
It was a delightful privilege for Sue to be able to spend part of Dashain with the children of the Sarangkot Nestling Home.
Tuesday 8th October, was the most important day of the festival, a day when the Tikka ceremony was performed by Nirmal, and children were given gifts. They were up early in the morning chattering excitedly, dancing and singing
​
28th August '19

Eleven girls aged between 6years to 14 years, are now living at the home having been referred by the Pokhara Child Welfare Board. Nirmala, the Home Mother, reports that the girls are settling happily.
​30th May '19​
Sarangkot Nestling Home Welcomes 9th Little Girl into it's Family.

Today another little girl came to live at the Sarangkot Nestling Home bringing the total number of girls rescued since December '18 to nine. We are delighted to say that they are settling in happily and seven have already started attending the little local school with the other village children. 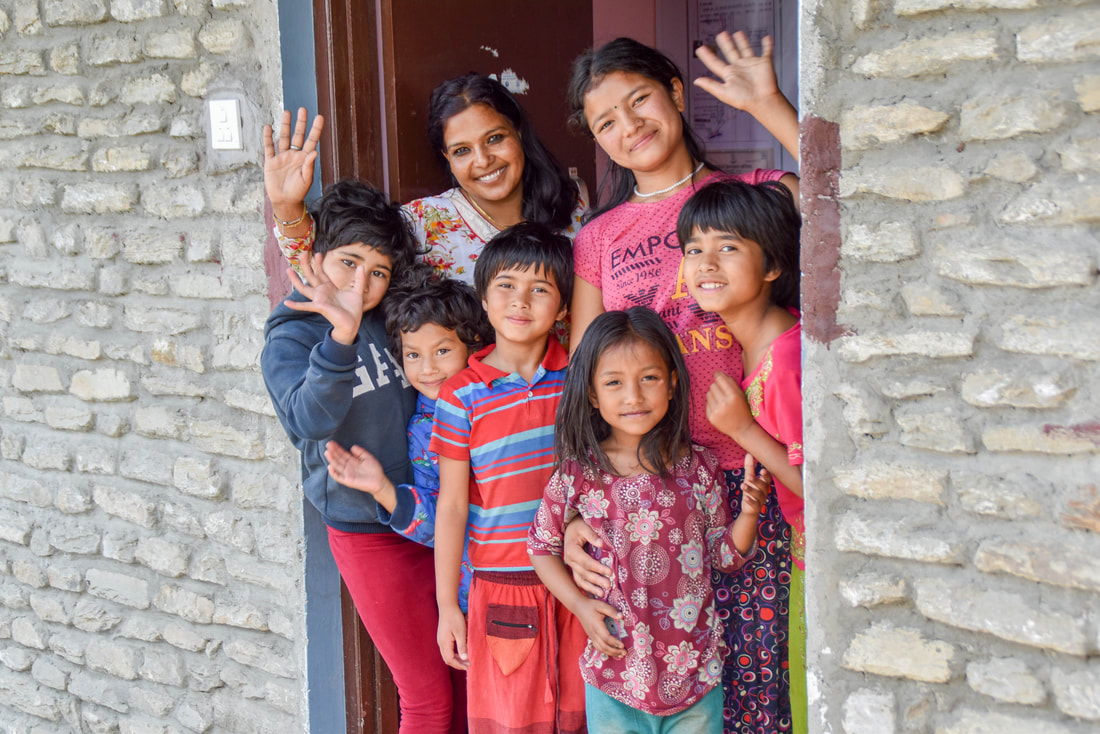 23rd April '19
Children Start School
Since December eight children have been welcomed into the Sarangkot Nestling Home. We are grateful to Nirmala the Home mother, for all she is doing to help the girls to settle happily.
April is the start of the Nepali school year and the girls will commence their schooling in the local village school, about twenty minutes walk down the mountainside.
We would like to thank Infantis de Karvesithali, who have generously donated school uniforms for the children. 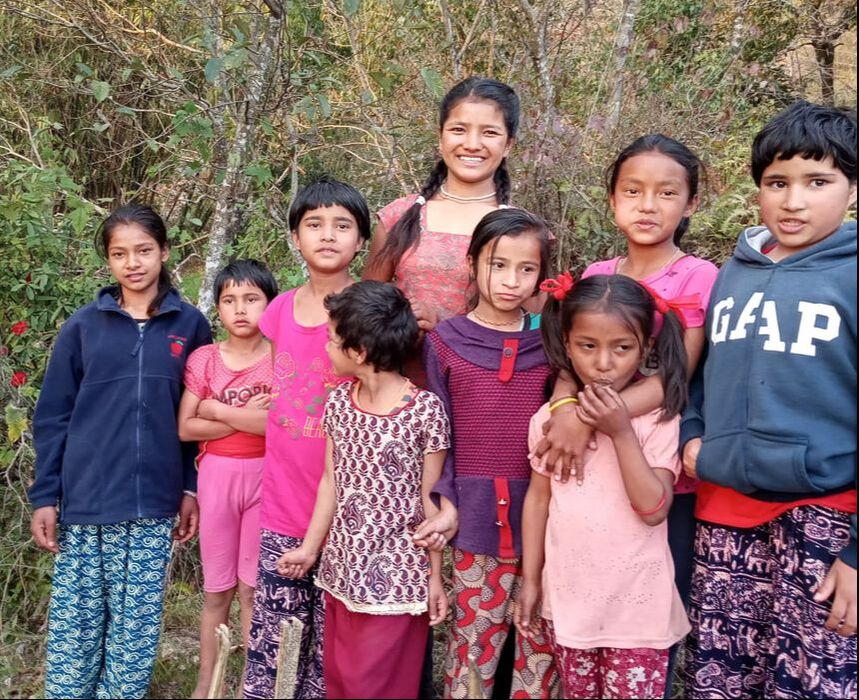 After five years of tireless effort by so many, and the generosity of countless supporters today was the day it became all worthwhile! Two girls with no mother or father were admitted to the Sarangkot Nestling Home. This is now their home, a place where they can regain their childhood, where they will be protected, cared for and given the chance of an education, healthcare  and have real hope for their future life - welcome, may you find lasting happiness here.

The home may be built but there is still work to complete before it is a safe environment for children to live. The video shows construction workers and volunteers building a retaining wall inside which, a pathway will run from the front door of the home, to the children's playground. The home is built on a hillside, so other areas of land are being terraced to give another fairly level play area. Other work includes a boundary fence, improving safety aspects of an internal stairway and increasing the height of the rooftop safety wall. While this work is being done furnishings and equipment are being sourced and purchased by Himshikhara, our partner NGO, and kitchen units are being installed.
A great piece of news is that the municipality have agreed to build a road to the site of the Children's Home and it is already under construction, (see below). Until now access to the site has been by a very rough track, cleared and widened to accommodate trucks by villagers, during the building of the home. 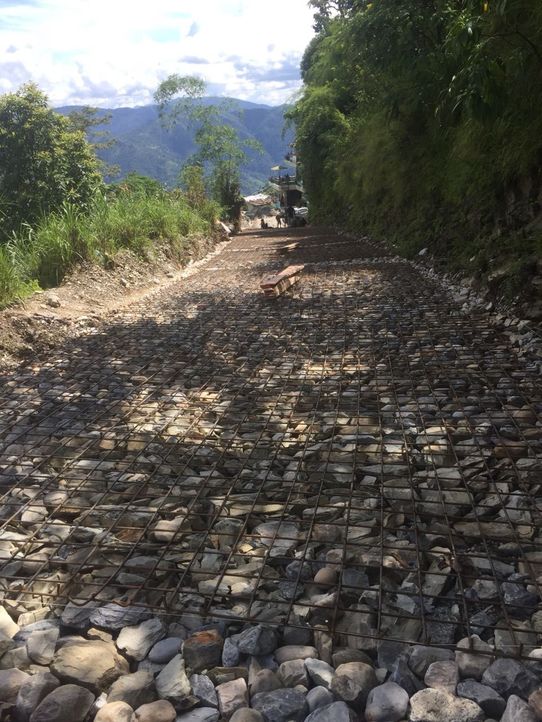 Today a dream became a reality, as the Sarangkot Nestling Home was inaugurated by Na Devi Pun, Minister for Social Development Nepal. At the special ceremony Na Devi Pun was joined by Rana Banda Thapa Ward President, Members of the Political parties, representatives from Himshikhara and Alliance Nepal and the Nestling Trust UK
The Nestling Trust would like to express deep gratitude to the many people who have supported us, and made this day possible.
10th April 2018

This is the day - Nestling Trust directors, Bijen, Subash, Barry, Mike and Sue flew in to Pokhara airport Nepal. and immediately took a jeep to Sarangkot. There before them, at the end of a rough track stood the beautifully constructed Children's Home. Four years before Sue had stood on that same piece of land, on the mountainside and overlooking  the Pokhara valley and Lake Phewa far below. There an eldery farmer told her that he wished that land, his land, to be used for a 'social purpose', he was no longer able to farm the land and was willing to donate it - so began the plans to form the Nestling Trust and build a Children's Home for destitute children. Nepal is one of the poorest countries in the world with huge problems related to poverty. as well as many natural disasters such as earthquakes, flooding, landslides etc. According to the demographic census of Nepal in 2012, there are an estimated 30,000 street children in Nepal where child trafficking is rife.
This home will provide a secure loving environment where children will be cared for, given the opportunity of an education and the chance to regain their childhood. They will grow up in a village setting alongside other village children, learning  Nepalese culture and practical skills necessary for adulthood.

Chirungebe Timulsina thank you for your selfless genorosity, your land is now home, playground and real hope for the future for some of Nepal's most vulnerable sons and daughters.
​September 2016 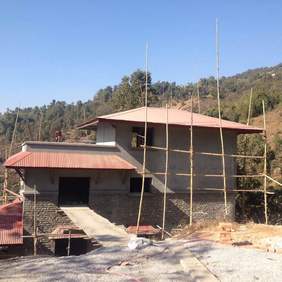 The construction of a new home for 20 children in Sarangkot, a village in Western Nepal.
The Himshikara Socio-Cultural Society and the Nestling Trust are now in a position to work together to create a home for some of the most vulnerable children of Nepal. Himshikara has supported the Nestling Trust’s director, Susan Hamblin in her volunteer work in Nepal for the past five years, and a bond of trust, determination as well as friendship has been forged. The task ahead has a strong foundation.

Detailed plans were drawn up and tenders from several contractors were considered. Permission to build was obtained from the government office. In April 2015, just one week prior to the earthquake, the Nestling Trust together with Himshikhara NGO appointed SMT Construction (P) Ltd. to begin construction of the children's home.
​
After the earthquake the Government of Nepal stopped all new building, to await publication of new building regulations. Furthermore plans had to be resubmitted to Pokhara Municipality Office and the Government engineers in Kathmandu, seeking permission to construct. Finally eighteen months later on 12th September 2016 the foundation stone of the Children's Home Sarangkot was laid and building started.

The land is on a hillside so careful consideration to a land survey was key to ensure the most appropriate section of the site is used for the home construction.
The Nestling Trust has purchased an extra 11,000 sq. ft. in order to provide space for building workshops where practical skills such as carpentry and tailoring can be offered to the children. It will also allow more space for a larger play ground area.

We are confident that the chosen contractor will comply with Nepalese health and safety regulations and Himshikhara and the Nestling Trust will use our best endeavours to ensure the contractor works accordingly.
Our two Nepalese Trustees, Bijen and Subash, as well as Krishna, a college lecturer in Pokhara, who, until recently, managed a small rented home for rescued children, will also monitor progress and quality.

Himshikara have approval for the project from the Social Welfare Council of Nepal, the Nepalese authority responsible for the development and management of children's homes in Nepal.

Our first rough estimate for building the home in 2013 and prior to the land survey was £50,000.00 - inevitably this has now doubled, and we have raised the required £100,000 thanks to our amazing supporters. 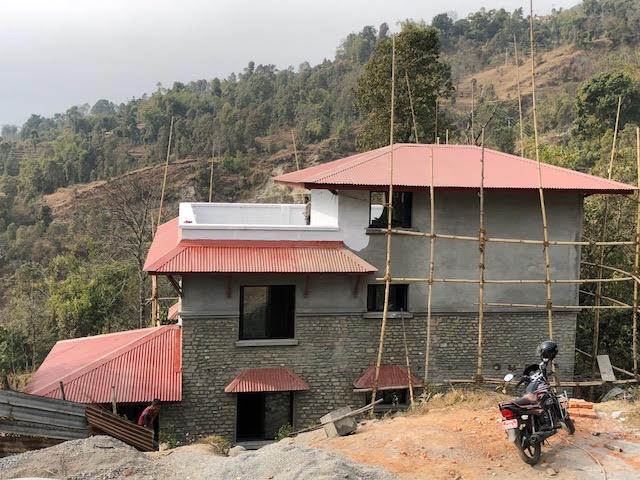 9th January 2018
Completion is now in sight - see below, most recent photos of Children's Home at Sarangkot.
19th July 2017 visit by TNT and Himshikhara
Subash, Bijen and Sue TNT directors, and Prativa, Himshikhara representative were delighted to see the progress made on the building of the Children's home at Sarangkot, the home is now really beginning to take shape. Whilst there, they were able to talk to SMT Construction staff, people from the local village who have been employed to help, as well as some IVHQ volunteers who are donating their time to assist with the construction. We are most grateful to everyone - you are working so hard, and in the most hot and humid Nepali summer conditions, to create this home for destitute and/or trafficked children in Nepal - thank you.
View More Projects