About the Nestling Trust

​The Nestling Trust​ is a UK Charity established in 2013, with the support of people from a small community in Wiltshire, to give protection, and hope of a future, for destitute and abused children of Nepal, also to help provide basic healthcare and health education for people living in remote areas of the country without any medical facility.
​
How it all began:
​Sue Hamblin has lived and worked as a community nurse in Wiltshire for the past 23 years. She first went to Nepal as a volunteer nurse in 2011 and worked in a small health clinic in Banepa, Nepal.

It was during that time, working in one of the poorest countries of the world, she saw children, some just a few months old, living in squalor and without shelter.  Exposed to life threatening dangers of disease, malnutrition, violence and abuse, they had nowhere to turn for protection. Moreover, thousands had no access to medical care due, either to the cost or lack of any facility in the remote villages.
It was here that the idea to change this cycle of despair for some of the most vulnerable children was born. With help from other volunteer doctors and nurses and Nepalese clinic staff initial healthcare and picnic days were started.
----------------------------
During a return visit by Sue to Nepal in April 2013, a breakthrough came when land was found through the Himshikhara Socio Cultural Society, a charitable organisation already supporting Sue in her work. This land was to be used for a social purpose, and an agreement was made, to build and establish a home for destitute children. A home, not an orphanage, a safe haven where children could receive care and protection from exploitation, violence and abuse that many will have had to endure.

Children rescued from trafficking would be cared for, while every effort is made to repatriate them, with support, to their families wherever possible. Staff trained in the necessary skills would provide psychological as well as physical care.
In November 2013 The Nestling Trust UK Charity was formed and with their partner non-government organisation in Nepal, Himshikhara, work began planning the Children's Home at Sarangkot, near Pokhara.
-----------------------------
​
Despite delays due to the 2015 earthquake, the foundation stone for the Children's Home was finally laid in September 2016.
​
On13th April 2018 The Sarangkot Nestling Home was inaugurated by Na Devi Pun, Minister for Social Development Nepal. At the special ceremony Na Devi Pun was joined by Rana Banda Thapa Ward President, Members of Political parties, representatives from Himshikhara and Alliance Nepal and the Nestling Trust UK

In a country where there is abject poverty, some are children who have been abandoned. Some have lost one or two parents through natural disasters, some through illness and disease, and some are those who have escaped or run away from abuse or exploitation.

The Human Security Report (2005) states that child trafficking is the third largest international criminal industry. In Nepal between 7000 and 12,000 children are being trafficked to Bangladesh, India, the United Arab Emirates and beyond every year predominantly into the commercial sex industry; but as well as this, in Nepal there is another type of child trafficking. Unscrupulous brokers approach desperately poor families living in rural areas, they offer, for a small fee, to take their child, to live in a place where they will receive food and a good education. In reality the children are forced into slave or bonded labour or placed in bogus orphanages and kept in appalling conditions to attract payments from well meaning tourists.

Sue discovered one such orphanage in 2013, which has resulted in 18 children being rescued. Of those 17 have been repatriated with their families and the search continues for the family of the youngest child.

The Nestling Trust will ensure every effort is made to rehabilitate children in their care with the child’s family or extended family offering ongoing necessary support and monitoring, we will aspire to follow “10 steps forward to Deinstitutionalisation” McArthur, D. (2011) The process can be long and sometimes family based care may not be possible, so within the Nestling Home our aim is to provide a secure, loving family environment where rights of the child are upheld and the children are integrated into village life. They will attend the local school and be encouraged and guided in their choices. They will also be given the opportunity to learn practical skills such as tailoring, computer technology, farming, food preparation etc necessary for attaining jobs in the future.

Every penny donated will be spent directly on the Home and Health projects, handled by trusted and experienced Nepalese volunteer staff, and our Nepalese Trustees.

Start of the Health Initiative 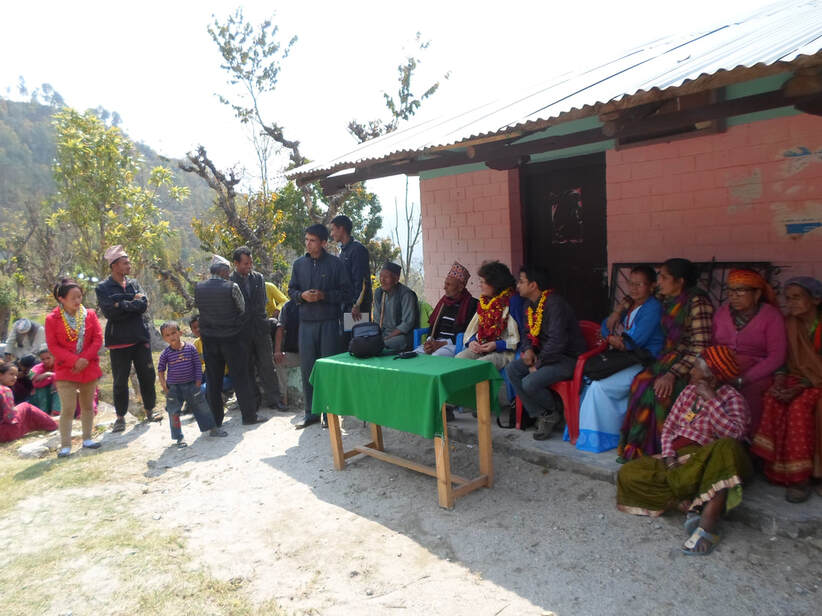 April 2014 the Nestling Trust partnered Social Transformation - Nepal (SITARA)  an NGO supporting a government health initiative providing basic Health Care and Health Education in the remote village of Marbu. Serves 6000 people.
2015 following the major earthquake, it gave immediate humanitarian, including the piping of running water to four villages whose water sources had dried up; and provided materials for three further health clinics to be constructed in the remote villages of Lapilang, Chilankha and Bhirkot. Each clinic serves approx. 5000 -6000 people.
2018 - a further health clinic was built and established in Melung, in coordination with the Nepal Government.
2020 - Humanitarian aid given during Covid-19 pandemic.
2021 - Health and Birthing Centre planned and work commenced in Baiteshwor approx. 12,000 people will benefit.
2022 - Construction of Baiteshwor Health and Birthing Centre to be completed this summer.
Our Vision
That families, especially women and children, living in remote rural Nepal, have access to basic health care and health education within 1/2 hour walk from their homes.

Our Mission
To facilitate the construction of village health facilities, in collaboration with the Nepal Ministry of Health, equip, staff and ensure their sustainability.